**Please note that this public version of the database has not been updated recently and does not cover all variables. We update our data regularly and use the updated data in our analysis work. This version is only for you to get a flavour of the data that we use**

The League of Scholars Research Talent Signature Report enables you to get a new perspective on the research talent at your University or research organisation.

This detailed and customised report contains a snapshot of up-to-date data on researchers at your institution compared with nearly a million others at the Top 2000 institutions worldwide.

The League of Scholars Talent Signature Report gives you a comprehensive and specific topic-level overview of your institution's key research strengths and includes:

This shows where your institution commands relative comparative advantage.
Our data, for example shows for University of Toronto Functional Genomics is among their Top 10 Research strengths - an area they lead the world in; Desalination is an area University of Technology Sydney leads the world in and Paleoclimate is an area of advantage for Columbia University.

Each signature report contains numerous ranked lists of individual researchers to help identify top scholars of today and tomorrow within your organisation.

This shows at a University-wide of the comparison of your institution with others including: 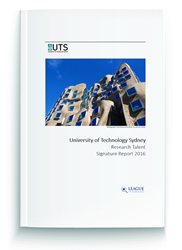